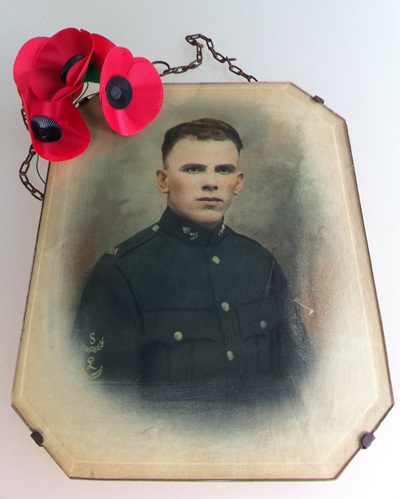 When I first heard Bob Dylan’s song ‘With God On Our Side’ sung so hauntingly by Aaron Neville of the Neville Brothers, it piqued an interest in how warring groups of Christians could both claim that victory would be theirs because they believed that God was on their side.

This incongruous position was perhaps most powerfully played out during the First World War, a topic and era that has always intrigued me.

These two pieces reflect something of that conflict; the second, a sermon that I preached one Remembrance Sunday where people afterwards admitted that they had made assumptions even today nearly one hundred years afterwards

Surely God is for us, but not necessarily on our side! He’s not on anyone’s side, but on the side of justice, peace and goodness. Something to ponder!

My war is your peace;
My humility is your pride;
My tears are your laughter;
My hunger is your surfeit;
My suffering is your release;
My imprisonment is your freedom;
My sadness is your joy;
My silence is your music;
My death is your life.
All that I was is what you are
Remember me.

July 1914
In church today our priest told us that a man, an Archduke, had been killed in Sarajevo. He warned us that this could have consequences that would cast a shadow of war over the peoples of Europe and that we must pray that God would soften the hearts of those propagating war. Indeed I pray that a peaceful solution is found soon, for how can the death of one man take our nation to war? Surely it was the death of one man that showed us the Way of peace

August 1914
I’ve watched with a mixture of regret and enthusiasm as some of our village lads have marched off to the nearby town to enlist in the army. They march off so bravely, so full of determination and hope that the cause for which they will fight is just. Their fathers salute but their mothers weep silently into their aprons.

October 1914
On my return from working on the top field I entered the house to see an envelope with my name neatly typed on the front propped on the kitchen table – my call up. My mother sat staring into the fire and seemed unable to meet my eye in case her true feelings showed. My father said how proud he is and how he is confident that he can manage the farm until my return. We all try not to think of those families who have already received telegrams of condolence

That evening we sat together and read about David and his triumph over the Philistines. Let us hope that God is on our side as well.

December 24th 1914
This evening I could hear the harmonious sound of carollers singing in the night – a lullaby for the world. ‘Stille nacht, heilige nach’ – Silent Night, Holy Night…. and then English voices responding with ‘O Come all ye Faithful’. Then we were stepping out from the trenches, hesitant, unsure of the etiquette of this bizarre situation; extending hands to wish Christmas joy – a fervent heartfelt offering of a sign of Christ’s peace

April 1915
The politicians promise us that we are fighting for a just cause. We all know that evil must never be allowed to triumph and God has promised us through the death of his son that if we are right then God will champion our cause. Who knows if they have told us the full extent of the battle and casualties; hundreds, thousands, tens of thousands? The sensibilities of our mothers and daughters must be reeling from the news – a slaughter of the innocents.

October 1916
When you’re up to your knees in stagnant mud that’s been polluted by decaying flesh and the blood of dying men; sharing your rations with a hundred scurrying vermin and being bitten to death by the tiny bites of a thousand lice; praying that each morning you’ll be sent over the top rather than spend another day under an artillery barrage, just waiting, wondering all the time whether the next one will maim or blow you to bits, it’s easy to feel a loss of faith in all that we once believed in. Then you look into the darkness; into no man’s land…illuminated by occasional phosphorous bright shell fire……and the clouds move aside from the face of the moon and for a brief moment Abraham’s inheritance blazes in the heavens reminding us of that night so long ago; when angels sang of peace on earth and good will to all men…..all men….both me and my enemy

Hail Emmanuel – God is with us. Let’s hope he is with us when we do go over the top.

November 1917
Everything seemed to happen in slow motion. One minute we were scrambling over the top of the trench, screaming murderous threats, heading for the breaks that had been so carefully cut in the barbed wire. A lone trumpeter evoking the spirit of Jericho as we threatened to over-power the earth built walls of our enemy’s positions. Our corporal, tall and upright, exhorting us to keep moving forward; then crumpling into the ground as if mown down like summer grass; a swathe of humankind being cut down with the sickle of death from the enemy machine guns. I knew I’d been hit as I fell to my knees… Night falling… and still I waited for an opportunity to be brought back to my trench. Loneliness and despair…my God, my God why have you forsaken me?

July 1918
Several months in the Red Cross hospital away from the lines and I’m patched up and back at the front. They keep telling me I’m one of the lucky ones, but time will have to be the judge of that – with wounds not serious enough for a discharge home, the shrapnel will almost certainly be a constant reminder of the trophies of war; the thorn in my side. The dim, flickering lamps in the dugouts give off poor light, hardly enough to read the small print in my dog-eared pocket bible. It’s hard to believe that only 60 yards away, across this pockmarked, devastated ground there may be any enemy soldier reading the exact same passage. Does God look down and laugh at the absurdity or does he yearn for his Word to resonate in our hearts so that we can bring this war to an end and seek peace

November 1918
The guns are silent…in three hours it will be over. The sun rose this morning, just as it has risen since the dawn of creation. When it sets we will be witnesses to a new era in the history of mankind. An era of peace for the whole world…for we surely must realise, dear God, that we must never let this happen again. The fight has been lost and won and now the world must be reconciled to one another and to God. We need to return to our lands and tell the people that God has decreed that we must beat our swords into ploughshares, and our spears into pruning-hooks; that we must teach that nation shall not lift up sword against
nation, and that our children shall learn war no more.

Actually Karl Bruggermann doesn’t exist but he could have been any one of the millions of soldiers who fought in the war and his experiences were documented from the many records and diaries that soldiers on all sides wrote.

It seems to me that it is very evident that we did not fully respect the wishes of or learnt as much as we could, from the experiences of a whole generation who lived through and fought in what they came to believe should be the war to end all wars.

Despite having this knowledge we now find ourselves living in a global economy where greed and profit by a dominant minority on the whole outweighs our desire for social justice; where a desire to serve Mammon is more powerful that the fear of God’s will; a world which has continued to be plunged into conflicts where powerful and corrupt people manipulate and abuse the weak for political gain and declare their actions will bring about ‘peace and security’

History has repeatedly shown that that really isn’t the case and that we shouldn’t and cannot rely on ourselves; but that real hope lies in the salvation of Christ, and a realisation that we have to be willing to fight against evil and sue for peace, if we believe in a God of love…because God is always on the side of those who not only love him but have love for one another.

After this service we will join with others in our community to remember not only the men whose names appear on the memorial and who gave their lives, but ALL who have tried to pass on that realisation and to create a world where we still have opportunities to honour and express our gratitude for their sacrifice to strive for peace. As Paul tells the people of Colossi ‘let the peace of Christ rule in your heart, to which indeed you were called in the one body. And be thankful’