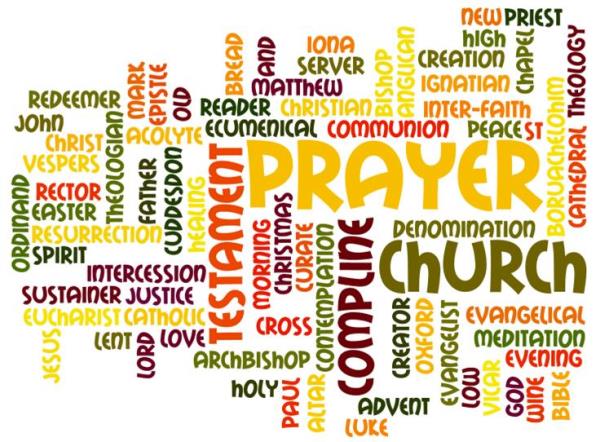 It was suggested that I might like to add a Glossary* to this blog as there are occasions when I use what might be described as a ‘technical’ word. Being an believer in plain English I hope the following may be useful. I will add to the list as I go along but if you spot a word that you’re not sure of then do ask me to explain. If you are still confused after reading my explanation then there is always a good old fashioned printed dictionary you could turn to and this online dictionary can be useful too http://dictionary.reference.com/

Boruachelohim – This is the title of my blog and when written as separate words – Bo Ruach Elohim means ‘Come, Spirit of God’ in Hebrew

Chaplain – a person, usually a member of the clergy, who is part of an organisation to offer spiritual guidance, a listening ear and caring presence to the people there. Chaplains are often appointed to schools, hospitals and prison among other places

Compline – or Night Prayer. This is a lovely, quiet service held at the end of the day usually before going home or going to sleep

Curate – a member of the clergy who works as an assistant to the vicar, rector, or parish priest. A position most often held by those recently ordained for a period of up to four years before they obtain their own parish

Deacon – An ordained minister who has not been priested, which normally takes place after a year but some ministers choose to serve as a permanent Deacon.

Ecumenical – This refers to the whole Christian church and all the different ways this is expressed, for example: Church of England, Roman Catholic, Baptist, Methodist, Free Church to name just a few

Ember Days – Are four periods set apart for special prayer and fasting and for the ordination of the clergy. The Ember Weeks are the complete weeks following Holy Cross Day (September 14); the Feast of St. Lucy (December 13); the first Sunday in Lent; and Pentecost (Whitsunday)

Epistle – Simply another word for a letter, written or typed, which is sent by post or messenger

Exegesis – To explain or work out the meaning of a piece of writing, especially Scripture

Exposition – To describe or explain an idea or theory

Formation – ‘Spiritual’ formation is quite difficult to define. At its simplest it is the way a person develops through gaining new insights, learning and processing ideas through study and building personal relationships; this can take place at a theological college

Gnostic – From the 2nd Century, gnostics believed that the material world was evil and only the spirit world was good and that salvation could be obtained from having secret knowledge. They disagreed over the person of Jesus. Some said he only ‘appeared’ to have a human form and was in fact purely spirit, whilst others claimed he only received his divine spirit at baptism and that it departed before the crucifixion – both of which views were considered heretical

Laetare – The word translates from the Latin laetare, and the imperative form, laetari means ‘Rejoice!’

OMC – Oxford Ministry Course – see Ripon College Cuddesdon’s webpage for full details of this and other courses they run http://www.rcc.ac.uk/

Ordinand – someone who has been selected to be put forward and trained for holy orders, that is to become a Vicar or Pastor in a Christian church.

Pauline – something that relates to St Paul, his writings or his characteristics

Petertide (and Michaelmas) – Petertide (also known as St Peter’s Tide) refers to the Sunday nearest to St Peter’s Day on June 29th and to the period around that day.In the Anglican Church Petertide is the major one of two traditional periods for the ordination of new priests (the other being Michaelmas around September 29th)

Reader – within the Church of England this is a lay or unordained person who is licensed to teach and preach. They are also able to officiate at funerals, but not weddings or baptisms

Sanctus – A hymn sung during the Eucharistic Prayer that begins Holy, Holy, Holy.

Theologian – a person who knows about theology (see below)

Versicle – is a short sentence said or sung by the minister in a church service, to which the congregation gives a response.

14 thoughts on “Glossary – Or What That Word Means In Plain English!”