Twilight over Jerusalem at Yad Vashem

The last couple of blogs have been particularly heavy in content and theology, and there is more to come. However to bring a little bit of relief it was decided that we should venture out into the big, bright city and do a little exploration of our own.

Over the last few days we have been leaving Yad Vashem as the sun is setting, the skies are still clear and the weather warm. The hotel is near to the Jerusalem Light Railway that stretches from Pisgat Ze’ev in the North to Mount Herzl in the West,. However, the first challenge is to cross the busy road. Yes, there are pedestrian crossing, but the traffic barely stops to pause and the language of the street is the honking of horns.

We decided to alight at the Jaffa Road stop and spend some time looking around the gift and ‘tat’ shops. For those of you unfamiliar with the latter expression it refers to those tacky souvenirs that are mass-produced usually with words like ‘I love ….’ or ‘I visited… and only got this lousy t-shirt’ for example. However, they are great fun to browse around and I managed to come away with at least one piece to add to our ‘tat’ cabinet at home.

There are some quirks in the shop signs that remind you that you are in a country that takes the Sabbath seriously, and as we were to find out later on in the week, it is indeed observed by the majority of Jews, whether orthodox, ultra-orthodox, liberal or secular

There is also some amazing street art

‘Jacob was left alone; and a man wrestled with him until daybreak’
Genesis 32:22-32

This image painted on a door shutter depicts Jacob wrestling with a ‘man’ who appears to be in the guise of an angel but who later turns out to be God. The man is certainly depicted as an incredibly strong, muscular being, but Jacob, though the smaller opponent, seems to be giving as good as he gets and is even resorting to a spot of eye-gouging. There is no clear winner in this contest, although Jacob comes out of it with his hip bone out of joint and a new name – Israel

Like many cities around the world, in Jerusalem there are a lot of ice-cream and frozen yoghurt cafes and it’s certainly nice to sit outside enjoying the local ‘Ben and Jerry’s’ selection of ices,  as well as taking the time to get to know the others. Alex, Angie, Anna,  Fran and I certainly enjoyed doing both.

The following evening we decided that we would perhaps venture a little further and travelled to the Old Walled City of Jerusalem. We knew that when we went later in the week it would be completely different, but it would be a chance to at least orientate ourselves. Back on the train but this time we got off at the Damascus Gate. 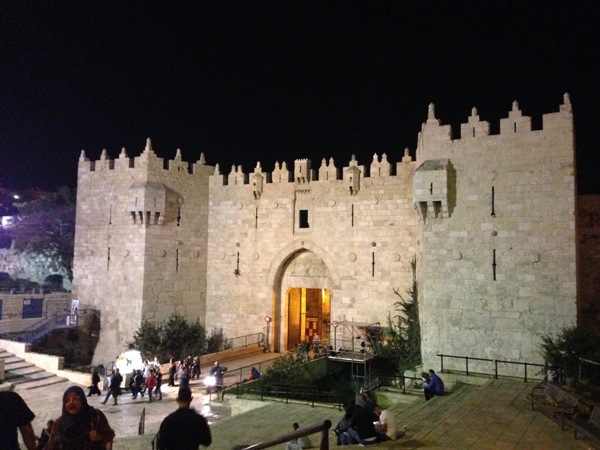 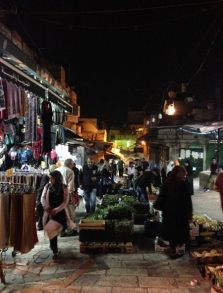 The entrance to the souk by the Damascus gate

The souks or marketplaces were nearly all closed or closing, but it made the narrow paved streets seem like a series of tunnels, twisting and turning one way and then another; dropping down one minute and then climbing the next.

Even so there were some interesting shops still open, including a spice and incense shop selling, no doubt the obligatory, frankincense. 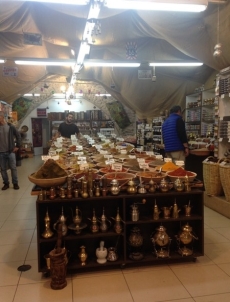 Spices both colourful and pungent

Eventually, we found ourselves outside of the Church of the Holy Sepulchre, almost deserted, with the doors locked. The claim to this most holy of places is made by Greek Orthodox, Armenian Apostolic and Roman Catholic denominations, and to a lesser degree the Coptic Orthodox, Syriacs Orthodox and Ethiopians Tewahedo.

However, none of these groups appear to be able to trust the other as the keys to the church are held by their Muslim neighbours at the Mosque of Omar

The Church of the Holy Sepulchre – closed and deserted

However, there were still plenty of devotees down by the Western Wall.  This remnant of the Second Temple, which was destroyed by the Romans around 70AD has become a sacred place where people can offer their prayers. Some people stand, gently rocking, with their faces or hands pressed against the wall, while others sit on chairs, with man and women separated. Whatever position you choose to take it is customary to walk backwards away from the wall, always facing it until you get to the exit – something that is trickier than you think

The men’s section of the Western Wall 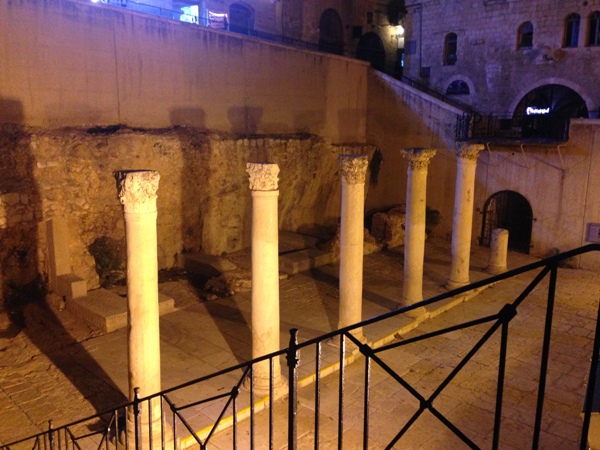 The Cardo in the Jewish quarter of the Old City

Finally, we caught the train back to the hotel. This time, however, we were packed liked sardines, and I found myself surrounded by young orthodox teenage boys returning from the synagogue, an Israeli solider including his gun, Muslim ladies in headscarves and Jewish families with babies in pushchairs and arm. It was to be remembered that Thursday night in Jerusalem is like our Friday night at home – everyone is out celebrating the weekend.