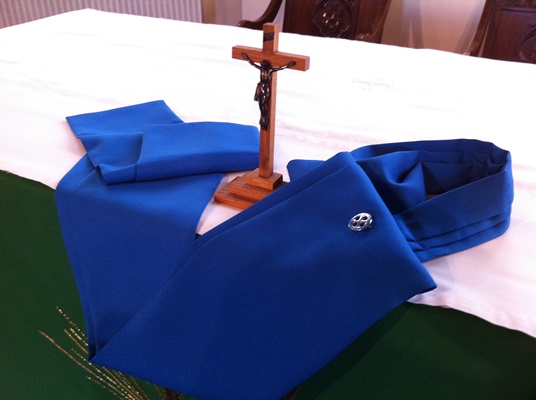 In life, there are key moments that are scattered along our timelines. Moments that stand out and are remembered as pivotal. Some of them are more general – like birthdays, weddings, the bearing of children… others are personal – times when something has happened that has taken us in a new direction and changed our lives.

Sometimes the change has been welcomed and sometimes it has been scary and uncomfortable. Sometimes we’ve been able to avoid it altogether by simply refusing to acknowledge that there is any need for change. So at church today, at what would be one of those pivotal moments in my life, I thought my talk could revolve around that topic.

All church congregations can become complacent from time to time -or maybe it’s just our particular brand of Anglicanism? We know what is going to happen each week, so we turn up with two or three minutes to spare; find our usual seat; exchange brief pleasantries with the people in the pews in front or behind us; offer a quick arrow prayer that the service will not take too long as we have visitors coming for lunch; settle down to say those well-worn and comfortable words of the liturgy and hope we won’t make it obvious if we go off into a daydream during the sermon…..

I simply asked them to change their positions, to move around and find a different space. Then, when they were sitting comfortably – or uncomfortably as some of them now appeared to be – we did a dramatic reading of one of Jesus’ less well-known parables… the Parable of the Lobster*! Before you start searching for it, you won’t find it in any of the Gospels or even the Apocrypha, but it is a parable nonetheless – a simple story to illustrate a point

The Parable of the Lobster

Narrator: Long ago, when the world was very new – there was a certain lobster who determined that the Creator had made a mistake. So he set up an appointment to discuss the matter.
Lobster: With all due respect, I wish to complain about the way you designed my shell. You see, I just get used to one outer casing, when I’ve got to shed it for another. Very inconvenient and rather a waste of time.
Creator: I see. But do you realise that it is the giving up of one shell that allows you to grow into another?
Lobster: But I like myself just the way I am!
Creator: Your mind’s made up?
Lobster: Indeed!!
Creator: Very well, from now on your shell will not change . . . and you may go about your business just as you are right now.
Lobster: That’s very kind of you. (the Lobster leaves)
Narrator: At first the lobster was very content wearing the same old shell. But as time passed he found that his once light and comfortable shell was becoming quite heavy and tight. After a while, in fact, the shell became so cumbersome that the lobster couldn’t feel anything at all outside himself. As a result, he was constantly bumping into others. Finally it got to the point where he could hardly even breathe. With great effort he lumbered back to his Creator.
Lobster: With all due respect (sighing), contrary to what you promised, my shell has not remained the same. It keeps shrinking.
Creator: Not at all (smiling). Your shell may have gotten a little thicker with age, but it has remained the same size. What happened is that you have changed – inside, beneath your shell. You see, everything changes – continuously. No one remains the same. That’s the way I’ve designed things. And the wisest choice is to shed your old shell as you grow.
Lobster: I see, but you must admit it is occasionally inconvenient and a bit uncomfortable.
Creator: Yes, but remember – all growth carries with it both the possibility of discomfort . . . and the potential for great joy as you discover new parts of yourself. After all, you can’t have one without the other.
Lobster: That’s very sensible.
Creator: If you like, I’ll tell you something more.
Lobster: Please do!
Creator: When you let go of your shell and choose to grow, you build new strength within yourself — and in that strength you’ll find new capacity to love yourself … to love those around you — and to love life itself. That’s my plan for each of you

Afterwards, I commented that before the story I had asked them all to make a change and that I had noted that some of them were very happy to do so and had made quite a radical change, moving far away from where they had been sitting. Others only wanted to make a slight change,  and still others really, really didn’t want to move at all, perhaps being like the lobster at the beginning

The truth is, change, however big or small, is often difficult and uncomfortable, but God calls us to do it many times in our lives. We often try and keep change to a minimum, trying to maintain the status quo, trying to change the circumstances we find ourselves in to fit with what we have planned…maybe weeks, months, years ahead

But what if God were to change those plans? How would you react?

I heard a really good quote the other day by a writer called Bob Goff. He said ‘I used to think I could shape the circumstances around me, but now I know that Jesus uses circumstances to shape me’ Love Does: Discover a Secretly Incredible Life in an Ordinary World

Those plans we made may have to change, but instead of trying to predict how it will affect us far into the future maybe we should think of it simply as what is the next thing that God wants us to do on our journey with him and how are we to do it. Is it to get up and change a particular aspect of your life; is it to go on a walk and spend some time with God; is it to do something radical – to say here I am God?

As I mentioned earlier, from a personal point of view, today I am at one of those pivotal moments. At the end of the service I ‘laid down’ my scarf as a Lay Reader in preparation of the move into the new phase of my ministry as an Ordinand. To reach this point there have been many changes in my life – some filled with utter joy and some filled with utter despair.

What I do know is that I haven’t faced it alone because God has met me in the change and has given me a lot of wonderful people to walk alongside me – and most of them were sitting there right in front of me at church.

Change brings a lot of challenges and a lot of blessings – it needs us to be willing to stretch and become more than we already are – but remember that we don’t do it alone. My hope and prayer is that even though change is often difficult and uncomfortable, you’ll welcome it as a tool from God to help you become who he wants you to be. All you have to remember, is that God loves you. Amen

The Bob Goff quote was from Steve Weins blog http://www.stevewiens.com/2013/08/09/what-you-will-need-on-the-road-of-resistance/. Thank you Steve for allowing me to share

2 thoughts on “Pivotal Moments and the Parable of the Lobster!”