Nobody wants to be subjected to sitting down and looking at the holiday snaps album. However, if you would like to look at more images then do go to the Jerusalem Gallery to see the rest of the photos

Looking toward the Old City of Jerusalem over the Kidron Valley

It is Shabbat and so one of the lifts in the hotel is automatically stopping at every floor so that you don’t have to push any buttons, and the coffee machines are covered up at breakfast. The coach easily travels along the road, which are clear of traffic – that is until we begin to climb up to the Mount of Olives. Here, as we enter the Arab neighbourhood of At-Tor the streets are busy as it is a normal working day and at least it stops raining as we get off of the coach.

The view is pretty spectacular up here, looking down over the Kidron Valley, with the whole of the Old Walled City of Jerusalem on the other side. Of course the golden Dome of the Rock (Qubbat as- Sakhrah) immediately stands out, especially when the sun starts to shine. However, looking down over the wall one is struck not by ancient monuments, but by rows and rows of graves. 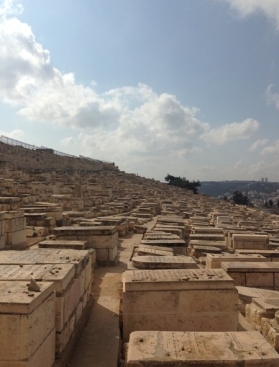 A prime, but expensive burial site, many Jews wished (and still do) to be buried on the Mount of Olives based on the Jewish tradition that when the Messiah comes, the resurrection of the dead will begin there.

On that day his feet shall stand
on the Mount of Olives,
which lies before Jerusalem on the east;
and the Mount of Olives shall be split in two
from east to west by a very wide valley;
so that half of the Mount shall withdraw
northwards, and the other half southwards.
Zechariah 14:4

The Mount of Olives is mentioned frequently in the New Testament, Jesus often going there to teach and prophesy, with his disciples. The Sanctuary of the Dominus Flevit is a little church half way down the rather steep incline that recalls the occasion that Jesus wept over Jerusalem, prophesying her destruction because they would not recognise the Messiah.

Mature Olive Trees in the Garden of Gethsemane

At the foot of the valley there is a small garden area of approximately 1200m², representative of the cultivated groves that once covered the Mount of Olives. It is within a railed area next to the busy Jericho Road, and any semblance of tranquillity is shattered by the honking of car horns. Here then is the place that constitutes the Sanctuary of Gethsemane.

On this site is also the Church of All Nations, also known as the Church or Basilica of the Agony. It was built in the 1920’s with donations from Christian communities all over the world. It is deliberately kept dark inside, but there is a beautiful piece of artistic fretwork on the entrance representing the tree of life and mosaics and stained glass windows inside.

A small service was being held inside and as the congregation started singing I realised it was Graham Kendrick’s The Servant King and several of us found ourselves joining in. Coming back out into the sunshine though I looked upwards at the tympanum (it’s always good to look up when you go around) and I noticed that there were two bronze deer either side of the cross. I discovered that these allude to the initial verse of Psalm 42.

As a deer longs for flowing streams,
so my soul longs for you, O God
Psalm 42:1 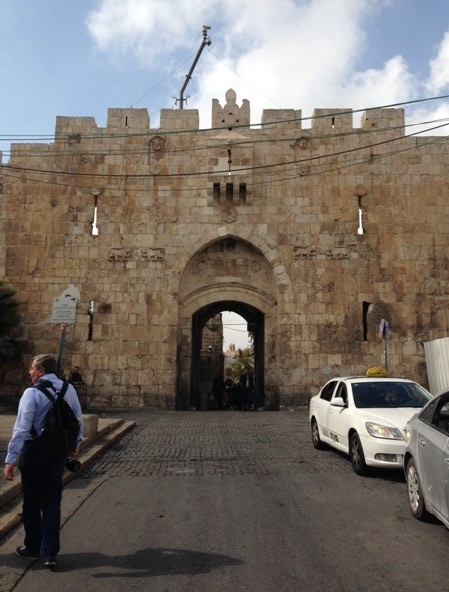 We walk along the Jericho Road to the east in order to enter the city through the Lions’ Gate. The gate is so called because on either side of the entrance there are four lions in bas-relief a reminder that the reason the wall were built was purportedly because of a dream that Suleiman the Magnificent had, in which failure to build the wall around Jerusalem resulted in him being devoured by lions. However, closer inspection reveals that they are probably panthers and not lions!

This is also known as St Stephen’s gate (his church standing nearby) and is the traditional start of the Via Dolorosa, the route believed to have been taken by Christ through Jerusalem to Calvary. For many Christian walking the Via Dolorosa is a significant part of their visit to the Holy Land and I would never deny their sincere devotion in doing so. My logical brain on the other hand tells me that it would be difficult to agree on the ‘exact’ route taken by Jesus as too many different churches and factions have been unable to do just that over the last two thousand years, each one trying to take the route closer to their own particular churches;

However, as in all things historical, there are some sites that can be pinpointed as archaeologically accurate and others that have gained acceptance by the majority of pilgrims. Visiting each of the stations certainly enables you to ‘experience’ the story in an authentic way just knowing that within this city Jesus walked. 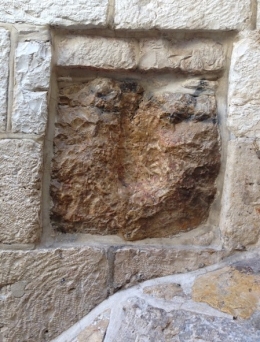 The handprint of Jesus?

There are two stations, however, that sparked my curiosity, both involving hands. The first was at the fifth station, where an unsuspecting bystander, Simon of Cyrene, was roped in to carry the cross. As Jesus stumbled he apparently rested his hand on the wall in order to keep his balance and an imprint was left. The touch of centuries of pilgrims has smoothed out the stone and made the depression deeper.

The second is at the eighth station where Jesus came upon a group of weeping women, and told them not to weep for him, but for themselves and their children. The station is marked by a stone embedded in the wall with the engraving IC-XC NI-KA , which translates as  ‘Jesus Christ conquers’.

There is a large hole at the bottom of the cross, and as we stood looking and hearing about the station I noticed several women, who appeared to be local, deliberately going over to the stone and placing their fingers into the hole and making the sign of the cross themselves. Perhaps the women of Jerusalem still heed Jesus’ admonition.

The last few stations are actually situated within the Church of the Holy Sepulchre; a place where Christ’s crucifixion and burial is said to have taken place. I would think that it should be a place of utter reverence but as always it turns into an ‘unholy scrum’ of people, pushing and shoving, camera’s flashing and fleeting glimpses of these sacred spots. I must admit that this was the place I was most reluctant to visit, for those very same reasons (I had the same feeling about St Peter’s in Rome). However, I cannot be too ‘holier than thou’ as I did take a couple of photographs inside, and a person’s personal response should not be held up against our own reservations. Perhaps I might say that it should not be the commercialism of the sites, and the fact that these things are extravagantly venerated that bother me, but my own expectations of what I want to experience and which I didn’t encounter. 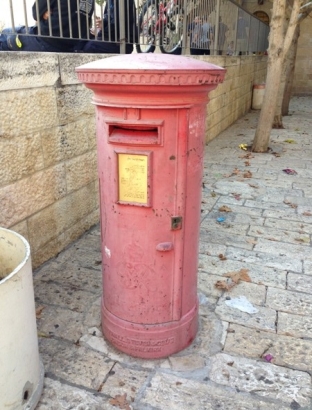 From there we made our way down and through the Jewish Quarter where we found a remnant of the British Mandate of Palestine from the early 20th century on to a remnant of even greater antiquity, the remains of a wall dating from the reign of King Hezekiah (late eighth century BC). It is called the Broad Wall because it is broad and it is a wall… it is a massive defensive structure, measuring some seven metres wide and was approximately eight metres high. No picture because I am sure you can imagine a broad wall.

Finally, we move down and round to a viewpoint over the Western Wall. The sun is beginning to set and its rays once more hit the Dome of the Rock. They are also reflected off of the wall where prayers continue to ascend and the Jerusalem stone glows as if alive.