What is it that makes us special? Thoughts from this morning’s sermon focussing on the reading 2 Corinthians 4:5-12

May I speak and may you hear through the grace of our Lord, Father, Son and Holy Spirit. Amen

I am nobody special. I will never become a worldwide known church leader. I will probably never become a diocesan-wide known church leader, but that’s okay. I will never be troubled by celebrity and stardom. I may appear from time to time in some charming local newspaper article about fetes or fundraising, but the paparazzi will not be camped outside of my door; that’s not a problem. My name will never be immortalized with a monument set up by the local community, although perhaps for a generation there will be some who will speak fondly of me, it won’t matter.

A remnant of my thoughts may continue to exist somewhere in the ether of the world-wide web, but it will probably be something that people accidentally come across whilst searching for something else, an amusing diversion, but quickly clicked away from – and that will be absolutely fine.

This isn’t an attempt at false modesty or to deny that any gifts or talents that I may have aren’t being put to good use. It isn’t to say that my existence is worthless or that I haven’t loved and been loved. It’s just that I am not special in my own right. But then very few people are. In the bible, those whom God chose to make known his message, were very often the most ordinary of people, they did not seek to proclaim themselves, in fact they were often reluctant to do so. But they trusted that God would give them the words to say, the actions to do and the courage to keep on trusting even when things looked like it would come to nothing.

Take for example Mary, the mother of Jesus, a young girl chosen not for her status, for we hear in the Magnificat, her song of praise to God when she visits her cousin Elizabeth, that ‘God has looked with favour on the lowliness of his servant’. Nor for her connections, betrothed as she was to a humble carpenter; but someone who was a woman of great humility and whose strength came from her knowing that she had achieved nothing except what God had enabled her to do, ‘for the Mighty One has done great things for me’.

Or perhaps we can think of Peter, a simple fisherman, whose enthusiasm often overtook his reasoning, whose bluntness many times led him to say exactly what he thought rather than reflect on what he was being taught. Tender hearted and inconsolable when he realised that he had thought only of himself when challenged about his relationship with Jesus, but who, when filled with the Holy Spirit was bold and fearless in proclaiming the gospel, ‘But Peter, standing with the eleven, raised his voice and addressed them’.

And of course there are many more from inarticulate Moses; through ‘I know best’ Jonah; to womanizing David, all unlikely choices to participate in God’s mission, all fragile human beings in their own right, but they were given the power to be something special… Like humble clay pots they contained a treasure.

Now if you’re going to place a valuable thing in some sort of vessel would you choose a clay jar? Yet, it really is the most appropriate material.

I wonder how many of you saw the series, The Great British Pottery Throw Down, a bit like the Great British Bake Off, but baking of another sort, in which contestants were given various types of clay and challenged to make things from simple drinking pots to whole toilet systems. Workhorse utilities to elaborate designs and functions yet fashioned from that most basic commodity, a lump of earth.

Pottery Toilet from the Great British Pottery Throw Down

When Paul is referring to jars of clay, he is referring to humankind itself – that we are the clay jars, a metaphor that takes us back to the description in Genesis, of God forming humans from the dust of the earth. However, we are called to hold within us the shining treasure, ‘the light of the knowledge of the glory of God in the face of Jesus Christ’. But the fact remains that vessels made of clay are not very sturdy. If you tip over or drop a piece of pottery it is easily broken, but Paul says there is a reason for God trusting us to hold within us this treasure. We are reminded that on our own we have no power, no special strengths or talents, we are as fragile as a jar of clay, but God’s all-surpassing power ensures that this clay can sustain all sorts of pressures so that his divine treasure is taken care of.

Paul reminds us that even as fragile, human beings, easily broken it is not only Christ’s life, but also his death that has made a change in us. He goes on to describe it in his letter to the Galatians, “I have been crucified with Christ and I no longer live, but Christ lives in me. The life I live in the body, I live by faith in the Son of God, who loved me and gave himself for me”(Galatians 2:20); Reminding us again that as jars of clay, we can’t depend on our own power and strength.

And the overriding purpose for this is ‘so that the life of Jesus may also be made visible in our bodies’. As Christians we are called to act as guiding lights and at other times flash warning signs; we need to seek out those in darkness and draw people into the light. We are called to live our lives as beacons of hope to those around us. Each of us will do this in different ways, some of us will become blazing flares that light up the whole sky around us, whilst others will be the constant inextinguishable glow of embers providing warmth and comfort.

Like an ordinary lump of clay, God forms each and every one of us into something that is useful and beautiful; like a potter he fires us in the kiln of life to give us extra strength, and he places within us the light of Christ so that we can shine out of the darkness.

As I said at the beginning, I nor anybody else is special if we live in our own right, but when we become the bearers of Christ’s light then that makes us special beyond measure.

They stripped him and put a scarlet robe on him, and after twisting some thorns into a crown, they put it on his head

A weekend away at college brings lots of new insights and learning, and it also gives us time for reflection. In the midst of all the talk about mission and preparing for ministry we entered Holy Week with a day of silence which was to include an area set aside for prayer and contemplation. Several people brought with them some resources to set up separate prayer stations but it is amazing that what might be disjointed individual activities often come together beautifully to make a whole spiritual space. Here are just a few highlights and the ideas behind them.

They took palm branches and went out to meet him, shouting, “Hosanna!” “Blessed is he who comes in the name of the Lord!” John 12:13

Making palm crosses is not necessarily easy at the best of times but to have to give instructions without speaking  makes it even more interesting. These were used for the Palm Sunday procession later on in the morning

The station reminded us that Jesus knew he was on his way to the cross when he entered Jerusalem on that first Palm Sunday. Many of those who had been with him and who cheered him that day were soon to fall away, unable to follow his instructions.  Matthew 16:24-25 reminds us that if we want to become followers of Jesus that we are required to deny ourselves and to take up our crosses. We were therefore asked to think whether we were willing to do so.

Kneeling at the foot of the Cross

When I survey the wondrous cross

Kneeling down and looking up at the cross is a powerful image. It was an opportunity to lay down all the things that we had got wrong  and for which we asked forgiveness for.

Before the cross as we thought of these things we could write or draw them in the sand. As the prayer told us:

Know that God forgives you…
Forgive yourself 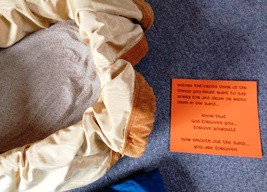 Now smooth out the sand… You are forgiven

Now smooth out the sand…
You are forgiven

The Stones Cry Out 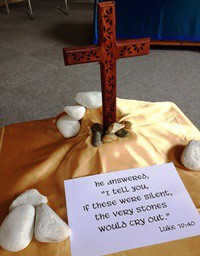 if these were silent, the very stones would cry out.” Luke 19:40

The cheering that accompanied Jesus’ arrival in Jerusalem was upsetting the Pharisees and they ordered him to tell his disciples to keep quiet. His response that even if they were silent then the very stones that lined the roadside would cry out

A reminder that we can not keep silent about injustices, and we were invited to think and pray about all those who are suffering at this moment in time and then to place a stone before the cross

The Crown of Thorns

I can do all things through him who strengthens me. Philippians 4:13

At the hands of Pilate’s soldiers, Jesus was mocked, spat upon and struck. People of faith often suffer this humiliation at the hands and voices of those who do not understand, who belittle their beliefs and who do so out of hatred; the answer being to respond with love. Jesus predicted that this would happen (Matthew 10:22) but there was reassurance that God would provide the strength necessary to endure this. Lighting a candle was a way of giving thanks for this

I can do all things through him who strengthens me.
Philippians 4:13 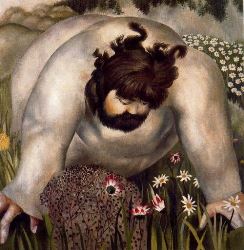 A chance to contemplate one of Stanley Spencer’s beautiful painting that was produced as part of a series entitled Christ in the Wilderness (1939-54). Here we see Christ contemplating not the grand lilies but the humble daisy, whose faces are turned toward the absorbed attention of their creator. The reference is to Matthew 6:25-34 with its reminder of the futility of worrying. (Concept – Jenny Tebboth) 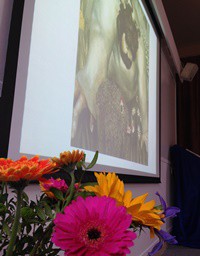 The Unity Cross and the Tree of Life

Other things to contemplate were the Unity Cross and the Lindisfarne Scriptorium, Tree of Life. The cross had been especially commissioned  for our opening worship when as individuals we had each taken one of the small piece of coloured glass that were scattered on a table and placed them within the cross to symbolise our unity in Christ. (Concept Jenny Tebboth) 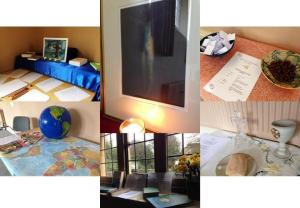 Also included were other prayer activities which included clockwise from top left above:

And whatever you ask in prayer, you will receive, if you have faith.”
Matthew 21:22