He drew me out of deep water

When I was little I would occasionally be allowed to go fishing with my dad. I say allowed, because it was actually for my father a time when he could escape the busyness of his work life and just simply sit and enjoy the peace and quiet of the river bank, certainly not to have to entertain a young child; but eventually I too learnt to appreciate this time of quiet companionship.

Of course, there was also the benefit of catching a few fish, that would be placed to wriggle around in the keep net until it was time to pack up and go home, and they would then be returned to the freedom of the water, presumably to swim free until the next time that they took the bait of the fly hook of another fisherman.

But there were also the days when we would sit there in virtual silence and the keep net would remain obstinately empty. For Simon Peter and his partners, James and John it must have been one of those days when much effort had brought little reward. Yet, suddenly here was this man inviting them to try one more time.

No doubt they were tired and weary, and also slightly sceptical, but something about him gave them a sense that they should do as he asked and trusting his confidence they cast their nets once more into the water and were suddenly faced with a catch that was almost overwhelming in its abundance.

It was miraculous, but what was even more surprising was their response, that they would immediately leave all that they knew and depended on to become followers and fellow missionaries with this young man. I guess it is this last outcome that most of us find difficult to understand and imagine ourselves duplicating but it is the whole story that leads us to see why this might be so and what it says to us about discipleship.

We know that Jesus will often use the situation he finds himself in to help people understand more clearly the point he is trying to make, so a miraculous catch of fish to a group of fishermen would certainly bring home the point very effectively. However, we can see that this was already being mirrored in his interaction with the crowd. Here was a sea of people, like a lot of people nowadays, who were beginning to realise that they were in deep water, all around them the water was foaming in turmoil and although they had the freedom to go anywhere, it was usually only in the direction that the tide took them.

Jesus, through his teaching was casting the net as the Word. This was not a net that was set as an entrapment, but a means by which God could rescue his people. As it says in Psalm 18, ‘He reached down from on high and took hold of me, he drew me out of deep water’.

He reached down from on high
and took hold of me,
he drew me out of deep water
Psalm 18:16

There was a growing realisation that without God they were lost, and Jesus was there to remind them of this. Simon Peter’s obedience and trust that what he was being told was a good thing, put him on his first step to acknowledging who Jesus really was. But this realisation also made him fearful; since the prodigious haul of fish only proved the awesomeness of God’s power and made his or anyone else’s effort pale into insignificance., ‘Go away from me Lord, for I am a sinful man’.

Yet, Jesus’ response was that they should not be afraid. The fact is that when they and we are drawn into God’s presence he asks us to part of his mission, to be his ears and eyes, his hands and feet, to work together as the body of Christ. And just as Simon Peter called for his partners to help with the extraordinary catch of fish, we never do it on our own, whether as individuals, or one church, but as the whole Church.

So the disciples were to be sent out to catch people. To use the Word to act as the net to draw them closer to God, and that net was to be cast far and wide. Just as each net of fish brings up not just one type of fish, but gathers many, so that diversity is reflected in the many different types of people who are called and seek to be in his presence. God is not looking for any particular type of person, just those who are willing to be transformed.

Of course there are always going to be as few who for some reason want to wriggle out of and escape the net, but for those who choose to believe and to take up the challenge there is no reason to hesitate, real freedom has been gained, grace offered and accepted and the task of catching people for God begun. 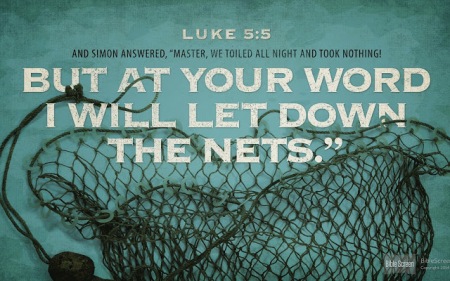 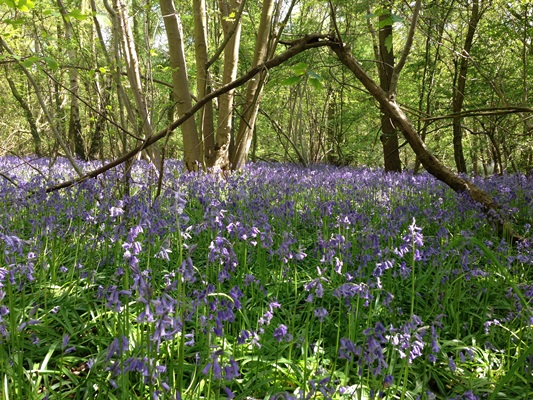 There are not many occasions when you are literally stopped in your tracks by something that catches your eye. This stopping is even harder when you are driving your car; but over the last couple of weeks there have been two sights that did just that.  Luckily they occurred on country lanes that meant that with a quick glance in the rear view mirror I was able to pull over to investigate a bit further

The first happened early in the morning as I drove past an open field of spring wheat. A movement caught my eye, which I mistook at first for a fox or rabbit breaking cover, but as I halted I realised it was a large male hare. This buck was paused, motionless; raised up on his hind legs as if checking out the terrain, before bounding away, too fast for me to grab my camera to capture the moment.

The second occasion was a few days later on my way home from college. This time it was blur of intense blue that made me step on the brakes. The woodland on my right seemed impenetrable with nettles and brambles, but by slowly reversing I could see a gap where the grass looked trodden down. It seemed a natural footpath led beneath the trees and I picked my way carefully over it to be met by a vista of bluebells in patchy sunlight under the newly budded green trees. Ahead of me stretched a path, made not by humans but an animal track, perfect as a byway for the resident woodland creatures and a perfect stimulus to imagination.

The following poem is a result of both encounters

Freedom of the Morning

Into the field of rippling wheat
bounds a wild creature of the wood.
Stopping abruptly; briefly silhouetted
against the emergent morning sun,
the buck raises himself on his hind legs,
his large ears attuned to nature’s rhythm.
Sensing no danger, he punches the air,
as if boxing the breeze; then lopes away,
quickly disappearing into the green sea

Above the hare’s wake, a lone gull
lazily flaps across the dark trees.
Disturbed, the rookery rises
in a dark chorus of harsh condemnation;
‘kaah-kaah-kaah’ echoes into the valley,
answered by mist muffled church bells
sounding the hour, and whose spire
stands sentinel over the slumbering town,
undisturbed by either fleeting interruption

Deep in the woodland, snuffling sounds;
as a black snout emerges from the ground,
followed by myopic eyes in monochrome skull.
The earlier rain has showered the undergrowth,
leaving the air cool and fresh, its sweetness
appreciated after a night underground.
Hunger draws the brock out further from his sett,
as he moves with assured gait along a trail,
his silvery-grey pelt camouflaged by twisting birch

This confidence is justified within his coppice kingdom,
There will be no challengers this morning;
His canine adversaries are confined to kennel;
Their baying silenced for lack of scent.
Yet, as he tramples a track through
the cerulean carpet of bluebells
a heady perfume sweetens his path,
and dappled sunlight dances for joy
as creation rejoices in the freedom of the morning 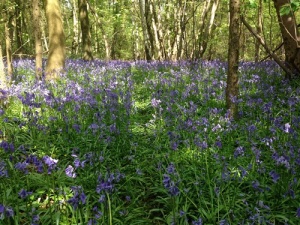 A path through the bluebells, Cuddesdon

Brock = This is a descriptive noun for a badger and comes from Old English and Middle English. Its origins lie in an Irish-Gaelic word ‘broc’ which means badger

*This beautiful pencil sketch of a hare is taken from a greeting card I recently purchased. The artist, Nolon Stacey, is self-taught, specialising in drawings of British wildlife, rural scenery, and farm animals. He currently lives in the Yorkshire Dales and gains inspiration from the picturesque surroundings and varied wildlife. More examples of his work, including items for sale can be found  at nolanstacey.com