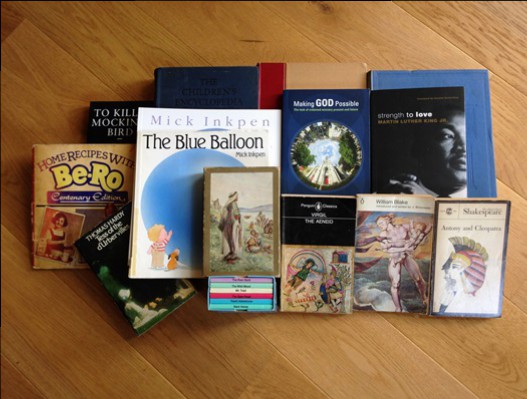 A life in books

I was recently asked to list ten book that had had an influence on my life. It’s not as easy as you might think, in fact rather than simply being able to dash off a list each one I chose needed to be balanced against another book, another memory, another situation or point in my life. For each one you discard another three or four could easily take its place.

The final ten are therefore not finite and may not necessarily signify every stage of my life in which a book has featured or even the most important; but they are a representation and compiling the list itself was an exercise in discovering how important literature and reading is in my life and no doubt in many other lives as well.

So here is my list, in no particular order, with a brief explanation as to why it made the final ten.

Here are the classics, the books I studied at school for my English A Level, but also the ones that I continue to read today

1. Aeneid – Virgil
The legendary epic poem telling the story of Aeneas as he travels from Troy to Rome. It appealed to my sense of adventure and love of history, myths and legends.

2. Selected Poetry of William Blake (and John Keats)
Blake’s poetry and artwork really entered my soul and spoke volumes to me, in particular his Songs of Innocence and Experience, but I had to cheat with the addition of John Keats as his was the first poetry that I wanted to memorise.

3. Anthony and Cleopatra/Macbeth – William Shakespeare
These two Shakespeare plays have become for me just two examples of how words, when beautifully written and composed can be understood by any age. A project to study, create and produce a filmed version of Macbeth using the original language with a bunch of 9 year olds proved that.

First reading books certainly can claim an influence on your life. I could so easily have include the Janet and John books which were my first readers; and the memorable time of being on holiday as a five-year old, sharing the same story with a young fellow vacationer – ‘Look, John, look. See tha’ boats’.

Still it is children’s books that appeal to adults as well that remain timeless.

4. Wind in the Willows – Kenneth Grahame
The world of Mole, Ratty, Badger and the irascible Toad spoke of an idyllic vision of the countryside, punctuated by ill-tempered weasels and the disastrous adventures of an annoying amphibian. This descriptive way of writing was only equalled later by Laurie Lee’s ‘Cider with Rosie’,

5. The Blue Balloon – Mick Inkpen
The well-worn copy of this book is testament to just how loved it was by my children. At two and half, my daughter Lizzie could ‘read’ it from cover to cover; every word perfect, every nuance expressed. It was a sharing book and just one of the reasons that I ordered a new copy so that it may be shared with future generations as well

6. Encyclopaedias
My thirst for knowledge was slaked by the two sets of encyclopedias we owned. One was a series of volumes printed sometime in the early part of the 20th century – the other set from the 50’s. However, both were put to full use, prior to the invention of Encarta and the internet.

Their use nowadays is somewhat limited, but where else could you find Jade, Jam and Jaguars all on the same page!

My studies have provided me with enough reading material to keep me busy for many a year to come. Whole new bookshelves have had to be created to hold it all, but the basis for it all is found in just one book – The Bible and in particular my 7th choice

7. The Four Gospels
Matthew, Mark, Luke and John have become essential authors as I follow my vocation, but many years ago they also inspired me to help form my character and outlook on life.

8. Making God Possible – Alan Billings
Theology books don’t often make me excited, but it was whilst I was exploring what my vocation might be that I read this book. I suspect is it a bit of specialist, niche book, but it made me want to say – ‘Yes, that’s it, that’s what it’s all about.’

9. The Strength to Love – Martin Luther King Jr
Combine the history and struggle of black, African slaves and 20th century segregation with the teachings of a non-violent pastor and you get insights into a world which I can only imagine and yet have a huge amount of empathy with. These were the subjects of my thoughts about justice and equality as I grew up. MLK’s writings are world-famous, and yet they still speak into so many situations that we still face today

10. The Be-Ro Cookbook
My final book is actually the 3rd edition of the book I have owned. Despite its dubious sexist cover photos; its dog-eared and bespattered pages tell the story of several decades of cooking favourite recipes. It is also a fact that in spite of those decades, I still need to refer to it each time when making scones for the exact quantities. Why is that I wonder?

So that is the ten that made the list – no mention of Jane Austen, Charles Dickens, Geoffrey Chaucer, Gerard Manley Hopkins, Thomas Hardy, Harper Lee, Homer…..

Or the many others that fill my bookcase…

I have a dream – Martin Luther King Jr.

Martin Luther King Jr.’s famous ‘I have dream speech’ was delivered on the 28th August 1963 in Washington, D.C. at the height of tensions surrounding racial discrimination and the freedom movement in America. His vision was that one day all people would be united regardless of the colour of their skin or their religion – that there would be one race.

How often do we regard ‘race’ as the basis for discrimination, as we try to define it through skin colour, stature, physical attributes…”You don’t look the same as me therefore you cannot be the same as me!”… Things get even worse when we make comparisons based on wealth, education and perceived intelligence. We end up with a system of categorising people into ever smaller sub-groups, concentrating on the minute differences rather than the broader similarities, and using these as an excuse for our behaviour.

Love is the only force capable of transforming an enemy to a friend
Martin Luther King Jr.

The trouble is that we all do it to some degree or other, however non-judgemental we consider ourselves to be. Which is why it was refreshing to hear Bev Thomas talk about Race Relations this week. Bev was born in the Black Country, an area in the West Midlands of England and has Jamaican ancestry. She belongs to a Black-Majority church in London (a description she wishes was less proscriptive) and loves doing family research.

Now, I also like doing family research and have managed to trace over 18,382 ‘relatives’ on my tree. Bev has also done lots of research, some of it including DNA testing. This has thrown up some interesting connections from all around the world and involving people of every hue and colour imaginable – none of which should really be all that surprising. After all our genetic make-up is dependent on an almost infinite number of historical relationships

How many ‘races’ are included in these ancestors? Actually only one……

For those who cite biblical creation texts, then we are all descended from one man and one woman, Adam and Eve via their descendent Noah. For evolutionists, the genetic proof is linked to one common DNA ancestor, Mitochondrial Eve and her counterpart Y-chromosome Adam*. Whichever way you look at it, human beings are part of creation.

Of course I’m not so naive not to notice that there are very clearly differences between people, and that some people’s attitudes and characters are not always in tune with our own; but it helps us understand that racial discrimination shouldn’t exist simply because we continue to highlight those differences through fear and hatred but that we should seek instead to recognise the common inner spirit at the core of humanity.

By doing this we are able to be reconciled to each other and as Christians to be reconciled to God; but more importantly if we don’t do this then how, as Bev reminded us, are we ever going to bring about what we pray for each time we say the Lord’s Prayer – that is for God’s Kingdom to come? That is, a kingdom not of different peoples, different nations or different races but one kingdom of one people, one nation, one race.

After this I saw a vast crowd, too great to count, from every nation and tribe and people and language, standing in front of the throne and before the Lamb.
Revelations 7:9

We pray for it, but I wonder, do we have the will-power, the vision, the capacity to dare to believe that this might be possible on a global scale?  Surely it’s too big an ask to consider such an incredible occurrence? But why not believe it can be so. It just needs to start by what you ‘see’ when you walk down the street, browse the shops, go to work, meet someone new. Is this a total stranger or is this a not so distant relative? Do I discriminate against them because they ‘seem’ different to me or do I rejoice in our diversity.

After all, It’s a fact that it would be impossible for racism to exist if we were simply to acknowledge that we really do all belong to the same, one unique race…… that is the human race