To be honest I don’t know if it really was put on the midnight train, or any train for that matter. Maybe it came by plane or postal van, but however it travelled, it arrived safely at my door last week.

The truth though is that it did come from Georgia – Tbilisi, Georgia to be exact – some 2,653 miles to the east of my home, where the very talented artist Tamara Rigishvili lives and works. However, the creation of this beautiful icon came about in what was for me an unusual series of events, which culminated in owning what has become to me a very important representation of the story of Jesus’ baptism.

In April of 2014, I wrote about using this icon to explain the actions performed while making the sign of the cross in Coming Into The Presence of God. Wanting to upload an image of the icon that has been used on that day, I googled several images and came up with one that was taken from Tamara’s website. However, I felt that I needed to get authority to do that, and so I e-mailed her and sought permission, asking her to check out the contents of my blog and with the promise of a link to her site. 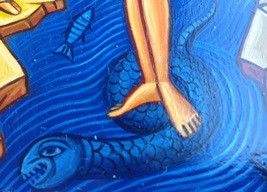 Christ submerged in the water of the Jordan

Thus a correspondence was begun between two people, thousands of miles apart, who did not know each other, did not necessarily speak the same language (although Tamara’s English is excellent, whilst my schoolgirl Russian is yet to be tested); connected by their common faith, and which resulted in my asking if she would ‘write’ a copy of the icon for me. True to her word, she completed the icon over a three month period and it was then carefully packaged and despatched…

… In the meanwhile, as part of my spiritual direction at college, it was suggested that I meditate on Matthew 3:13-17. This description of Jesus’ baptism is just one of the bible’s explicit passages where the Trinity appear together.

And when Jesus had been baptised, just as he came up from the water, suddenly the heavens were opened to him and he saw the Spirit of God descending like a dove and alighting on him. And a voice from heaven said, ‘This is my Son, the Beloved, with whom I am well pleased.’
Matthew 3:16-17

As a Trinitarian at heart, I have always found that the three-fold nature of God; Father, Son and Holy Spirit has both fascinated and frustrated me. On the one hand each has its own separate identity and characteristics, on the other they are all one and the same. I do not argue against this nor do I find it easy to explain – although traditionally in the Church of England, as a curate it usually falls to their lot to preach on Trinity Sunday each year – so I better get my thoughts in some order by then!

The passage itself presents a beautiful image of being submerged beneath water, and then a figure rising in a sparkling cascade to see the sky above suffused with a pure light that is concentrated in a shaft centred on their head and a clear voice filling the air with a confirmation of their worthiness. What, it was suggested, if that figure were you?

So often we can feel unworthy, and could not imagine such a thing, but we are invited to do so by God as he offers us his love and grace. ‘This is my daughter… this is Linda… this is [insert your name here]’.

I don’t believe that God arranges for these things to come together without a purpose, so as I spend time contemplating that passage alongside my beautiful icon, I hope and pray that you too will accept that grace, knowing that you ARE worthy to receive it.

For more details of Tamara Rigishvili artwork, please do visit her website