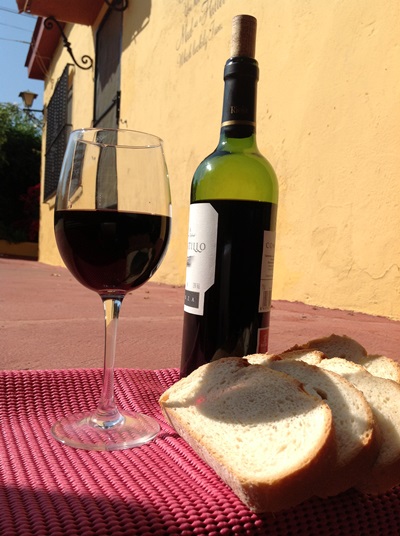 Back from my holidays… back from the land of ruby red wines and the paradox of soft crusty bread… back from a country where both of these elements are important not only in everyday life but which permeate those lives in an everyday faith.

Spain has some of the oldest and largest places in which to practice that faith, and one of the highlights of our holiday in Seville was the opportunity to visit some of these amazing buildings, where triumphs of architectural ingenuity sit alongside the brash gaudiness of high altars, reredos and quires.

One of the most interesting we discovered was in Cordoba, and I need to start with a brief history lesson to give an understanding of its significance even today. Now known as the Mezquita, it was  originally the site of the 7th century Visigothic church of St Vincent. The Visigoths were the Spanish branch of the nomadic german Goths,  and ruled in Andalucia until the Moroccan muslims (the Moors) pushed their way up through Gibraltar and began wide scale building projects.

However, they were sympathetic to Christian places of worship and initially divided the church – merely enlarging the building into a wide and airy worship space and adding a minaret. That was until 600 years later during the ‘Reconquista‘ when King Ferdinand III of Castile reclaimed it for the Catholic church and converted the centre of the mosque into a cathedral and the minaret to a bell tower.

What is particularly interesting to those in favour of creating inter-faith opportunities, is that over the past decade official entreaties have been made by Spanish Muslims to be allowed to pray in the cathedral, but to date these have been declined by the Vatican.

With every great building almost invariably comes a great tower – both an object of practical defence and making sure your neighbours know you’re there, especially if your install a few hundredweight of bells and ring them at every opportunity! I love climbing up towers but for some reason when I’m at the top my brain converts that desire into an ludicrous feeling that despite gravity holding my feet firmly on the ground my whole body will launch itself over the edge… still it never stops me attempting the climb

The towers of Seville Cathedral, La Giralda and Cadiz Cathedral

Perhaps the triumph though was to be the visit inside Seville cathedral. Billed as the largest gothic cathedral and third largest church in the world, I had imagined that the highlight would be to sit in front of the high altar or the golden Retablo Mayor. This incredible work of human creativity is indeed the largest in the world, ‘It measures 20 metres high by 18 wide. It tells the life of Christ in 28 intricately carved niches. It has 189 small sculptures. There are four central scenes showing the Nativity, the Assumption of Mary, the Resurrection, and the Ascension of the Lord. The style is Gothic, but the sides are in the Renaissance style. The artists who worked on it include Pyeter Duncart, Jorge Fernandez Aleman, Alejo Fernandez, Roque de Balduque, and Juan Bautista Vazquez’.

Perhaps you noted the was and the would be – because on this occasion it was hidden behind a rather disappointing 2D photo drape! To be honest though I have always been slightly ambivalent about the extravagance and garish nature of some of these monuments to God. On the one hand feeling impressed by the scale and artistry and on the other aware that God is not contained within a building however majestic it may be. Are these the types of places that God wants us to meet him in?

Biblically, it is true that he did agree that Solomon could build a temple in which he would dwell, having refused to let his father David do so.

Go and tell my servant David, ‘Thus says the Lord: It is not you who will build me a house to dwell in… You will have a son who will rule in peace… His name will be Solomon… He will build a temple for me……When Solomon had finished building the temple of the Lord .. the Lord appeared to him…and said to him: “I have heard the prayer and plea you have made before me; I have consecrated this temple, which you have built, by putting my Name there forever. My eyes and my heart will always be there.

Perhaps then there is something about creating such incredibly awesome buildings in order to demonstrate the glory of God’s majesty, even if it is not and could not be his permanent dwelling place – that space being reserved in our hearts

A small part of Seville Cathdral

The audio guide, therefore, summed it up rather neatly. The architects of Seville cathedral had very clear design specifications, to make it “so grandiose that all those who see it will take us for madmen”. What a glorious way to be a fool for God!