It’s All Greek To Me

So apart from introducing the world to democracy, realising that the earth was round and working out some very difficult mathematical calculations… what have the Greeks ever done for us? Well one thing that they’ve done is give me a headache! What shame they didn’t invent analgesics (although they did give us its name from the Greek words ‘without+pain’

Languages can be fascinating – discovering that our everyday words have their origins in Latin, French or Anglo-Saxon with a smattering of Viking thrown in for good measure. The roots of words give us a hint of what they might mean in hundreds of languages

Most modern languages use the classical Latin or Roman alphabet with its 26 letters. So what happens when the letters themselves are unrecognisable? Now I’m not so naive to forget that there are a great many other languages that use scripts and hieroglyphics to enable billions of people to happily produce both beautiful and outstanding literature

This is what the Lord, the God of Israel, says: “Write in a book all the words I have spoken to you” Jeremiah 30:2

It’s possible that Jesus would have spoken and understood Aramaic and read Hebrew scripts – if not understanding a smattering of Latin and Greek. However, it is the Greek that is of interest to me as we undertake a Greek-lite course at college

First there is the basic alphabet with only 24 letters (25 if you double up on the ‘s’ sound). At first it lulls you into a sense of security as you recognise letters that seem familiar…. then you find out out that they say something different! A capital H (eta) says ‘ay’ and P (rho) becomes an R sound. Then there are the impressive squiggles that send your pen backwards and forwards in unnatural directions – 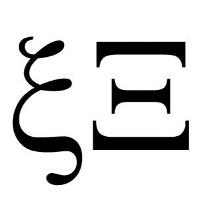 I do get the point that some words are masculine and some are feminine… and that just like French there’s no rhyme or reason as to which should be which – but then there’s also 2nd Masculine Declensions and definitive articles….and this is only in the 3rd lesson!

So why subject myself to such apparent torture? Well you have to remember that the Greek speaking world was a hotbed of philosophy and classical thinking and when St Paul chose to take his message to the Gentiles it was into this world that he made such inroads in spreading the Gospel – to the people’s of Corinth, Phillippi and Thessalonica amongst others; and Luke’s Gospel and Acts were almost certainly written with a Greek audience in mind

How wonderful then to make at least a small attempt to read some of the bible in an original language….. And the passage we are starting with – what else but John 1:1