From one airport in darkness to another in darkness – at 6.30am the Luton skyline was barely visible and yet hundreds of people were making their way into the departure lounge eager to set off on their journeys around the world.

Flying to Israel on El Al involves quite a rigorous security procedure and we were told in advance that there would be searching questions and that we were to answer them as honestly as possible… “How long have you known the people you are travelling with?” “Well actually I’ve only just met some of them about half an hour ago”. “Have you been given anything as a gift?” “No, but I do have a gift for someone I haven’t yet met”. Still I seem to have answered to their satisfaction and they stamped my card and let me through (although I later found out they had opened my suitcase as certain items were rearranged!)

The baggage check-in clerk seemed particular interested in why I wasn’t wearing my collar as I was a Reverend. I told her I didn’t have to wear it 24/7 but I did have a nice pair of pyjamas with a collar insert… I think she got the humour.

When we got to the boarding gate however, I was reminded of a joke… you’ve heard the one of the Jewish homeopathic doctor, the Methodist minister and the Anglican priest no doubt? Not really a joke but three woman chatting together about world attitudes, children’s education and the effect of social media on family life – interfaith and ecumenical discussions all at once!

Cloud islands in the Mediterranean

The rain was beginning to smirr on the outside of the aircraft window as we took off, but a few hours later we were flying across fluffy cloud islands at the eastern end of the Mediterranean.

I also got the chance to taste a truly kosher airline inflight meal with its own certification – which included an unusual Swiss dough and cheese pancake, on which I wasn’t sure if I should use the proffered salt and pepper condiments

It’s always exciting to glimpse the first view of land as you get to end of your flight and as we approached the coastline of Israel the city of Tel Aviv lay below us… but let’s be honest one city from the air so often looks like every other one and it wasn’t until we could see the uninhabited land that lies in between that the landscape revealed we were not over the relatively lush green of southern England.

Another lengthy one and half hours to get through passport control before we emerged out into the darkness and then a forty minute minibus ride to our hotel outside of the old city of Jerusalem.

The Jerusalem Gardens hotel at first glance seemed a little tired, and we are room sharing, so the quirks of there being only one large towel in the bathroom and six hangers between us might be a challenge, but the evening meal was excellent and a glass of wine in the bar meant that we were ready for bed sooner than we thought.

Who knows what the view from our balcony will reveal in the morning, but to know that we are sleeping under the same moon and stars as our brothers and sisters around the world gave us pause to thank God for safe arrivals and new opportunities 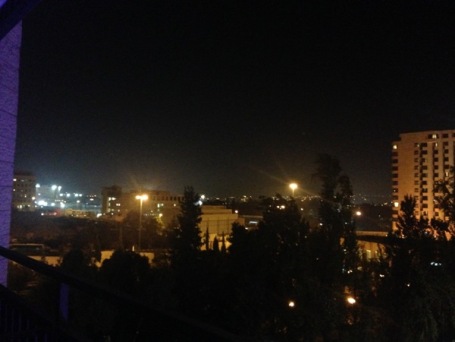 The view from the 4th floor

Please note that the internet connection in the hotel, whilst free, is intermittent and not very broad, so my hope of publishing each post in the evenings may not be possible. However, I am sure there are ways to overcome this small blogging problem.