This is the last in a series of four meditations for Christmastide. I hope you have enjoyed reading them

Joseph sat under the welcome shade of the sycamore trees. Mary, his wife and their child also rested nearby. He could see his son chattering away to his mother, who was doing her best to answer his inquisitive questions.

His son? He knew that wasn’t strictly true, according to nature’s law; too much had happened over the last two or three years to make him only too aware of that fact; but the truth was he felt it was now his responsibility to fulfil a father’s role.

The last time they had been on a journey like this Mary had been expecting their first-born any day; the child that now played happily at his mother’s feet. Her latest pregnancy wasn’t obvious yet, still it was hard to have to travel in such conditions. However, circumstances meant that they had become refugees – putting themselves into self-imposed exile, heading towards a land where their ancestors had been treated like slaves.

Joseph knew it was for the best. The vivid dream, warning him of death and despair, had prompted their hurried departure from Bethlehem. Even now, from such a great distance, there were stories exchanged between fellow travellers and the camel trains they passed, telling of King Herod’s murderous slaughter of thousands of innocent children – death on the whim of an egotistical maniac with an inferiority complex

After the wise men had gone, an angel from the Lord appeared to Joseph in a dream and said, “Get up! Hurry and take the child and his mother to Egypt! Stay there until I tell you to return, because Herod is looking for the child and wants to kill him.” Matthew 2:13

It was as if a dark shroud of mourning was descending on the land; a palpable wail of inconsolable sorrow rising up. What sort of world was this going to be to raise children in?

Hopefully, though, his family was safe now, only one more day till the border crossing and that was merely a desolate rocky outcrop in the Wilderness of Egypt. He’d bought them as far south as he dared, but after crossing they would have to make their way north-west in order to find villages and towns where he might earn his trade as a carpenter. He was grateful for that at least, for who knew when they might be able to return.

The strange gifts they’d been given, by those unexpected visitors, might be of value if their lives depended on it, but somehow he’d couldn’t see Mary agreeing to part with them and who was he to treat such precious gifts so lightly. No, he would rely on his own skills, skills taught to him by his father and ones which he would pass on to his sons in the future, to give them a good chance to earn a decent living and start families of their own.

He looked up at a sudden burst of laughter, and watched as his son ran smiling towards him with his arms open wide.

Joseph scooped him up into his arms and walked back to where his wife was sitting; gently helping her to her feet. Setting his son down, both he and Mary prepared to follow Jesus as he hastened on a little way ahead, leading them towards their new life.

He Qi, Nativity – The Flight Into Egypt

*Sycamore Trees have been cultivated since ancient times. The Pharaohs of Egypt called them Nehet. The oldest sycamore tree is in El Matariya, Egypt and is known as the Virgin Mary Tree.

At this time of year, in the lead up to the Christmas celebrations, we spend a great deal of time watching and waiting. What is it though that we are watching and waiting for? Is it for the first sign that Christmas is coming? In that case our watching should have started in September, when the first packs of mince pies appeared in the shops! Maybe the earliest sign that we’re watching for is when, what has become an iconic Coca Cola advert, ‘Holidays are coming, holidays are coming….‘ appears on our television, as the twinkling lorry wends it’s merry way to bring cheer and healthy profits for its stockholders – perhaps the waiting is over when we’ve seen that?

On the other hand we might be watching our credit card groaning under the increase in spending as we are tempted to celebrate the season by purchasing an excessive amount of presents to show our friends and relatives just how much we really love them…… Maybe though, we won’t be waiting for the bill to flop onto our doormat and realise that it will probably take a whole year, if not more to make the repayments – if only we hadn’t bought that one extra present that got put in the cupboard last year and might just do as a raffle prize next time someone asks for one!

Indulging in luxuries, wine, and rich food will never make you wealthy
Proverbs 21:7

What is it we are watching and waiting for? Are we watching our weight as the pounds pile on as we tuck into several Christmas party dinners and surreptitiously open the big box of chocolates that we were saving for Christmas – we can always get a replacement before the day. Or are we waiting for the sales that will start on Boxing Day, so that we can go and hunt out all those bargains… the credit card should just last till then… or maybe we could return that ‘delightful’ jumper that Auntie May bought us, then we can buy what we really want!!

Am I being a bit cynical, a bit ‘bah humbug’. I probably am, but I’m certainly not being holier than thou, because at some point or other I have done all of those things – except for returning the jumper Auntie May! For many people the real joy of Christmas will be doing all or some of these things – and there is love and joy and happiness in coming together, sharing, and giving and receiving gifts. For many of us though there will be a little bit of sadness that people won’t watch and wait for something considerably more important and certainly longer lasting than the use by date on the egg nog.

At church we have started a new year, with the season of Advent, The word Advent is an anglicised version of the Latin word adventus – meaning ‘coming’ – what then or who is coming? Well Christmas is coming (regardless of whether the geese are any fatter) and we will spend these next few weeks preparing to celebrate the coming of Jesus to earth over 2000 years ago. But we’re not really watching and waiting for his birth – that’s already happened; and his resurrection means that we will not really be watching and waiting for his coming among us, because he’s already here in the gift of the Holy Spirit.

What the watching and waiting will involve is a retelling of the ancient stories of a long awaited Messiah, through the visions of the prophets, the blessing of Mary who carried the Christ-child in her womb and the messengers, like John the Baptist, who prepared the way for Jesus’ earthly mission. Perhaps more importantly we will once again be watching and waiting expectantly in preparation for Jesus’ Second Coming, as we put aside some of the excitement and spend some time being penitent and a little more thoughtful.

In the meantime, we can also spend time doing some more watching and waiting…. Watching and waiting for opportunities, whether it’s time or money, to bring to all those around us, who for one reason or another may not have the same chances or opportunities to join in our celebrations, a feeling of hope for the future; and to show once again that Jesus really is the reason for the season!

May God bless us all this Advent 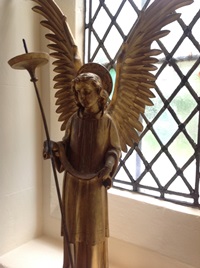